The president has claimed that trade wars are ‘easy to win’ but Beijing and the EU plan to hit back against states that elected him.

Washington’s penchant for brandishing “big sticks” will come back to haunt it, China Daily, official organ of the Chinese government, warned on Friday as trade tensions between the two countries continued to fray. And China, and the EU, have identified just where that haunting will begin: in America’s heartland.

For Donald Trump, the threat of a trade war with China, as well as potentially with Mexico and Canada, is a vital component of an overdue effort to correct longstanding injustices that have seen the US taken advantage of by trading partners for “far too long”.

But the US looks likely to be hit hard if the war of words escalates into action ahead of any deal. The Chinese state media outlet cited research by the Rhodium Group pointing to a 92% drop in Chinese investment in the US, to $1.8bn, in the first five months of the year, its lowest level in seven years.

And the effects of the multi-front trade dispute are already being felt. US lumber prices are up 32% since the president announced a 21% tariff on Canadian lumber imports. The National Association of Home Builders estimates that the tariffs will result in about 9,400 construction jobs lost, raising the price of the average single-family home by $9,000. 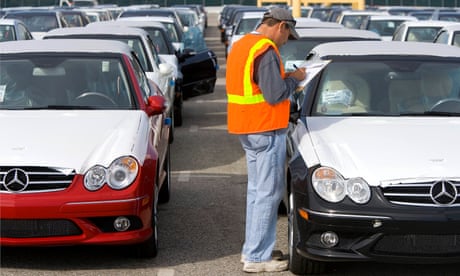 Trump threatens car tariffs after EU sets up £2.5bn of levies on US

Virtually any product that uses aluminium or steel is already being affected. In its first-quarter earnings call, the household appliance maker Whirlpool said the steel and aluminium tariffs would cost the company an extra $50m. Stock in Campbell Soup, the tinned food processor headquartered in New Jersey, has dropped 14% since the company identified steel tariffs as a potential hit to its bottom line in 2019.

Trade wars are “easy” to win – Donald Trump declared last March – shortly before plunging the US into its worst trade dispute in decades. That remark may well come back to bite him as the EU and China turn the heat up on Trump by targeting the states that elected him.

In response to US moves to target steel and aluminium imports, the EU has targeted $3.3bn of American products, a list that includes including 25% duties on Harley-Davidson motorcycles, Levi’s jeans and bourbon whiskey, created in response to Trump’s initial barriers to imported aluminium and steel.

As it stands, the first wave of Chinese 25% tariffs will hit $34bn in US goods and take effect on 6 July, with another $16bn still to be scheduled.

They included a variety of agricultural products, including soybeans, corn and wheat along with beef, pork and poultry, plus automobiles. A second set of tariffs to begin at a later date span other goods including coal, crude oil, gasoline and medical equipment.

Both China and the EU have been politically motivated in their choice of US products to target.

Take the swing-state of Wisconsin. Trump carried the state by less than 1% in the 2016 presidential election and it is the home state of the outgoing House speaker, Paul Ryan. Harley-Davidsons are manufactured in the state. A further loss of jobs to the already troubled brand could prove unpopular with Wisconsin’s voters, many of whom are employed in agriculture, another target of tariffs.

Or take the largest item on the Chinese list due to take effect in two weeks – soybeans. They are grown in Iowa and Nebraska, both Trump states; bourbon on the EU list comes from Kentucky, another Trump state, home of the Senate majority leader, Mitch McConnell. Chinese tariff hikes on oranges will hit growers in the swing-state of Florida.

Dan Ikenson, director of Cato’s Herbert A Stiefel Center for Trade Policy Studies, says that the tariffs could cost the US economy $100bn – roughly equal to the gains from Trump’s corporate tax cuts.

“The idea behind China’s strategic retaliation is to remind the president that he needs those states for Republican victories in the fall,” says Ikenson.

“The Chinese are responding in a similar way by picking off the products. They’re looking to increase the cost of production for US industries,” Ikenson says. Beijing, he adds, “is hoping that just the presentation of their list will be enough to get US industry to convince the administration that it’s going down the wrong path”.

Dear Europe, if you want to stop Trump, sanction his companies

Ikenson believes the European and Chinese targeting of red-state products is beginning to pay off in terms of a brewing battle between Republicans in Congress and the White House.

And it’s not just the swing states that will be affected by a trade war – all US shoppers could end up paying the price, says Ikenson, because tariffs on raw materials end up as a tax on costs of production.

“Hopefully, he will be talked off the ledge before the tariffs come into effect on July 6,” he says.