The Saudi / Trump ties have become more obvious in recent weeks leading many of his supporters wondering where he really stands on Radical Islam being that Saudi Arabia is a exporter of the sect of Islam that is causing the most trouble. 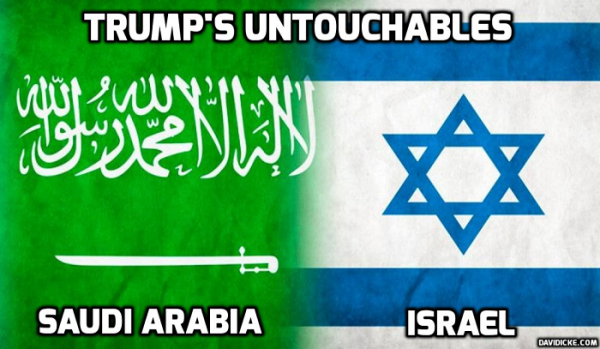 Trump is also planning to attend the NATO meeting in Brussels and the G-7 summit in Sicily.

A senior administration official said that Saudi Arabia will be the first country visited and that the symbolism is intentional.

The official explained: “the reason why we chose the Saudis first is because they are the custodians of the two Holy Mosques.”

Asked for elaboration, the official added, “We thought that was very important because obviously people have tried to portray the president in a certain way, but I think that what he wants to do is solve the same problem that a lot of the leaders in the Islamic world want to do.”

Saudi Arabia is the birthplace of Islam and the location of two of the religion’s holiest sites.

U.S. “ally” Saudi Arabia censors Merkel’s hair on Saudi TV.
If Trump was serious about tackling terrorism, he would be bombing Riyadh. pic.twitter.com/FaPSpOoazI

Not a joke. Saudi TV censors Trump’s hair during his upcoming visit to Saudi Arabia. pic.twitter.com/rIs4Mu4ACv