A man rammed his car into four soldiers guarding a mosque in the French city of Valence Friday, local officials said.

The soldiers were not seriously injured and were able to open fire on the car, injuring the driver twice with bullets, Frédéric Loiseau, Secretary-General of the city prosecutors’ office told NBC News.

The driver, whose motive was not immediately clear, was in the hospital, he said. 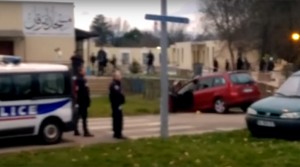 Valence is about 60 miles south of Lyon in southern France.

The target was the soldiers and not the Mosque Al Fourquanes itself, Loiseau added.

France is on high alert after the Nov. 13 Paris attacks that killed 130 people. The soldiers are part of the reinforced security guarding places of worship and other sensitive sites.