China has dispatched a convoy of warships for its first ever naval exercises in the Mediterranean, together with a Russian flotilla.

The drills demonstrate a strengthening bond between Moscow and Beijing, who – despite having no formal military alliance – see their combined might as a counterbalance to US power.

Both countries have been modernising their armed forces, and while their equipment still lags behind top-end Western technology, experts say they are closing the gap.

Xi Jinping came to power in 2012 vowing to dedicate his presidency to building the “Chinese Dream” of the “great rejuvenation of the Chinese nation”.

Part of that dream involves a major overhaul of China’s 2.3 million-man military which is three-times the size of Russia’s but which critics say has become bloated, corrupt and unfit for battle.

“Chinese leaders see a strong military as critical to prevent other countries from taking steps that would damage China’s interests and to ensure China can defend itself, should deterrence fail,” said a Pentagon report released on Friday.

Mr Xi’s determination to drag the People’s Liberation Army (PLA) into the 21st century will see defence spending rise to around £85 billion in 2015, up around 10 per cent from the previous year.

The People’s Liberation Army Navy (PLAN), now the largest in Asia with more than 300 vessels according to the Pentagon, will receive a hefty chunk of those funds.

Beijing currently has at least 25 destroyers and is building China’s second aircraft carrier at a shipyard in its north-east – part of ambitious plans to build a “blue water navy” that can give Beijing greater control of the high seas.

China is also seeking to increase its fleet of submarines, currently comprised of 59 diesel submarines and nine nuclear power ones, according to a recent United States’ Office of Naval Intelligence report.

However, simply investing in military hardware will not in itself solve China’s problem, experts warn.

Beijing still faced “a multitude of challenges” before it could boast of having a modern, war-ready military, Dennis J Blasko, author of The Chinese Army Today, warned in February.

Those challenges include an excess of non-combatant troops, a lack of experienced commanders and a lack of combat experience for an army that has not fought abroad since 1979.

Mr Xi, who is chairman of China’s Central Military Commission as well as president, has also toppled a number of senior military figures in an attempt to fight corruption within the PLA. Those taken down include General Xu Caihou, the commission’s recently deceased vice-chairman.

While Russia’s total active military manpower is a third of China’s, it is rich in tanks and artillery, the hardware which it allegedly sends into Ukraine to help pro-Moscow separatists fighting government troops there.

Defence spending in Russia doubled between 2004 and 2014. Dmitry Medvedev, then president, announced in 2010 that 13 trillion roubles (£270 billion) would be spent over the next decade on a massive state rearmament programme.

The plan was to bring the proportion of modern weaponry in the Russian armoury to 70 per cent by 2020. 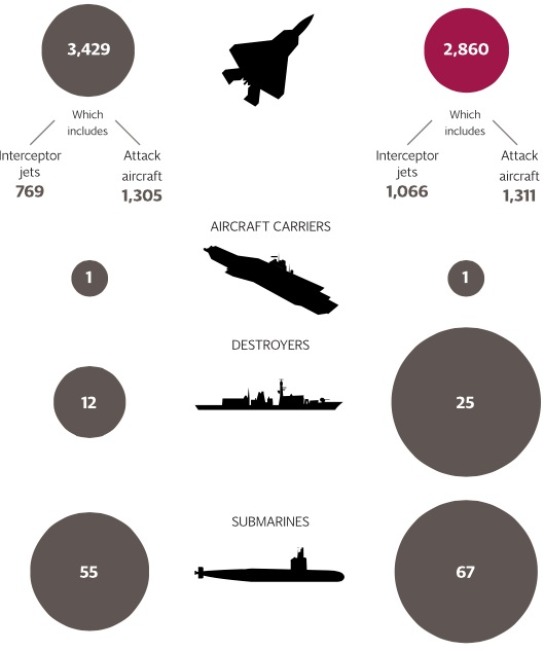 Russia’s military budget rose by 33 per cent to about 3.3 trillion roubles in 2015, although officials have warned it may have to be cut back amid the oil price slump and Western sanctions.

That said, the general trend is towards a large and ambitious boost in the strength the armed forces.

This year the military will receive 50 new intercontinental ballistic missiles with nuclear payloads and 200 new aircraft. The new Armata tank and the Koalitsiya self-propelled artillery unit were shown off at Saturday’s Victory Day parade in Moscow, to commemorate the 70th anniversary of the end of the Second World War.

As China and Russia upgrade their weaponry, such drills are likely to become an increasingly frequent reminder of their shared intent to erode US supremacy.

“The Russia-China rapprochement is a sign of the changing world order, in which the West is still very relevant, but no longer dominant,” wrote Dmitry Trenin, the Russian security expert, on Friday.