More than 2,100 American and British paratroopers will jump into Fort Bragg, North Carolina, on Monday for the start of a massive exercise that marks the next step forward in a unique relationship between the two nations’ airborne units.

The Combined Joint Operational Access Exercise is the largest U.S.-U.K. bilateral airborne training operation to take place on Fort Bragg in the last 20 years. It will feature paratroopers from the 82nd Airborne Division’s 2nd Brigade Combat Team and about 900 paratroopers from the United Kingdom’s 3rd Battalion, The Parachute Regiment, 16 Air Assault Brigade.

The soldiers will jump from American C-17s and C-130s and Royal Air Force aircraft onto Fort Bragg before moving to seize an airfield, evacuate non-combatants and execute offensive and defensive operations.

Marines from 2nd Marine Division will participate in the exercise from nearby Camp Lejeune, North Carolina. 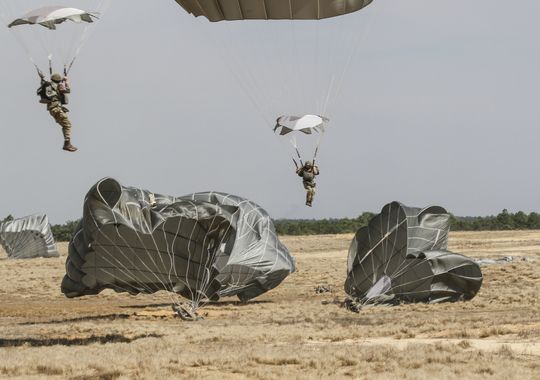 This means the unit is ready to deploy, if needed, to any contingency within 18 hours.

The exercise, slated to end April 20, marks a major milestone in the 82nd Airborne Division’s interoperability program with 16 Air Assault Brigade. Having about 900 British paratroopers embedded in and operating under 2nd BCT also builds upon the depth of the two units’ relationship — last year, a British company-sized element trained and was integrated with an American battalion.

“It’s an awesome responsibility at the same time as it is enjoyable to be here at this time, doing these things for this division, for our Army, and, in many ways, leading the effort from a crisis response standpoint,” Ryan said.

The long-term goal is to have the ability to integrate the 16 Air Assault Brigade into the 82nd Airborne Division, allowing the two units to operate quickly and seamlessly if they’re ever called upon to respond together in an emergency.

The ongoing relationship between the 82nd Airborne and 16 Air Assault Brigade grew out of an agreement signed by Army Chief of Staff Gen. Ray Odierno and U.K. Chief of the General Staff General Sir Peter Wall in March 2013. 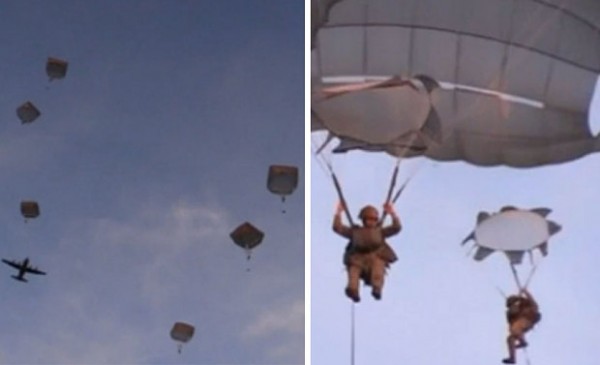 “In many ways, we interoperate better with 3 Para than we do with others in our own Army and others in the Defense Department simply because we’ve had leaders focus on it and work through problems,” Ryan said. “That’s a telling sign that with good leadership, we can do anything.”

The intent is for all the lessons learned and relationships built during these exercises to form lasting “building blocks,” Ryan said.

“The building blocks we’re setting in place now are designed to be exactly that, building blocks that don’t go away, that we continue to use as the baseline for where we’re going,” he said.

This year’s exercise is “to date the most significant, far-reaching milestone in that partnership,” Ryan said. “The end-state, however far-reaching it may seem, is having 16 Air Assault Brigade essentially interoperable as a subordinate brigade to the 82nd Airborne headquarters like any of our other brigades.”

The growing relationship is even more important thanks to lessons learned in Iraq and Afghanistan, Ryan said.

“Certainly, the greatest lesson learned is the appreciation that future battlefields are going to be multinational and combined in nature,” he said. “Interoperability is not a nice-to-do, it’s a must-do.”

For this year’s exercise, approximately 900 British paratroopers began arriving on Fort Bragg March 9. They conducted a series of small arms and artillery live fire training exercises, collective training events, airborne operations and planning and rehearsal sessions in preparation for the main exercise that kicks off Monday.

The American and British soldiers have taken advantage of their time together to learn about each other’s equipment, tactics and standard operating procedures, said Lt. Col. Mike Shervington, commander of 3 Para.

One example is having U.S. soldiers jumping out of British aircraft and vice versa, he said.

“That sounds easy, but it’s not,” Shervington said.

For starters, the two armies use different parachutes – the T-11 for the Americans and the Low Level Parachute, or LLP.

The T-11 carries more weight, while the LLP opens at a lower level, Shervington said. The LLP also has a shorter count before the static line releases the parachute; three seconds instead of six for the T-11, he said.

Another issue the two armies had to work through was the equipment that was scheduled to be dropped onto the drop zone, Shervington said.

“Dropping British equipment off an American aircraft? That has never been done before,” he said. “And that’s just the start of it. That’s just getting in the fight.”

Once the paratroopers are on the ground, the British paratroopers will adhere to the 82nd Airborne‘s standard operating procedures, Shervington said.

“We have to secure objectives and prosecute tactical activities based on Col. Ryan’s orders,” he said. “That needs mission command relationships. The science of this is pretty complex. It looks easy in the window, but behind the window is a lot of worker bees nugging through these issues.”

It’s critical for the two units to work through these issues in training, Ryan said.

“Every time we run into a challenge, it harkens back to the more we sweat in peace, the less we bleed in war,” he said. “That’s exactly how we should be doing this.”

Other issues the paratroopers have had to work through include communication, logistics and supply, Ryan said.

“There are hundreds of lessons learned every day, but they’re all good problems to encounter, because we’re solving them before it really matters,” he said.

Lessons are also being learned at the soldier level, as the American and British paratroopers spend time with one another.

“My guys so far have loved it,” said Sgt. James Voelger, a team leader with 1st Squadron, 73rd Cavalry Regiment. “We’ve all been trading combat patches and telling stories, just building that camaraderie is fun.”

“We’re hoping to get the guys out downtown, have a beer with them, and not only talk tactics but also offline, everyday life and where people are from,” Hunt said. “I think that’ll be more interesting, especially for the blokes. The opportunity for someone from the U.K. to come over here and do this is phenomenal. The experience the blokes will get, they’ll take it back and it’ll stay with them the rest of their career.”

In the time the British paratroopers have been on Fort Bragg, they have traded tricks and tips on everything from weapons to clearing rooms to the way they carry their gear.

“We usually carry a lot of our gear on our chest, the British do it with a belt and harness,” said Staff Sgt. Britton Bearss, a squad leader with 2nd Battalion, 325th Airborne Infantry Regiment. “It’s been interesting to see how they sustain on their own more than we do.”

Hunt, who has served two tours in Northern Ireland and three each in Iraq and Afghanistan, said he has had the chance to jump with the T-11.

“They’re quite different parachutes,” he said. “The American one takes a little bit longer to open than ours, it’s smoother of a ride and a lot bigger. You can carry a lot more kit with the American parachute.”

Bearss, who has deployed once to Iraq, said his soldiers are enjoying their time with the Brits.

“We played soccer with them, and of course the British decimated us,” he said. “They’re just like us, normal guys, hanging out.”

Shervington said his soldiers’ time on Fort Bragg has been beneficial.

“What worked really well was soldiers exchanging ideas one-to-one, where they just laid kit out, talked to each other on drills and fired each other’s weapons,” he said. “Soldiers, regardless of the flag, are loving it.”